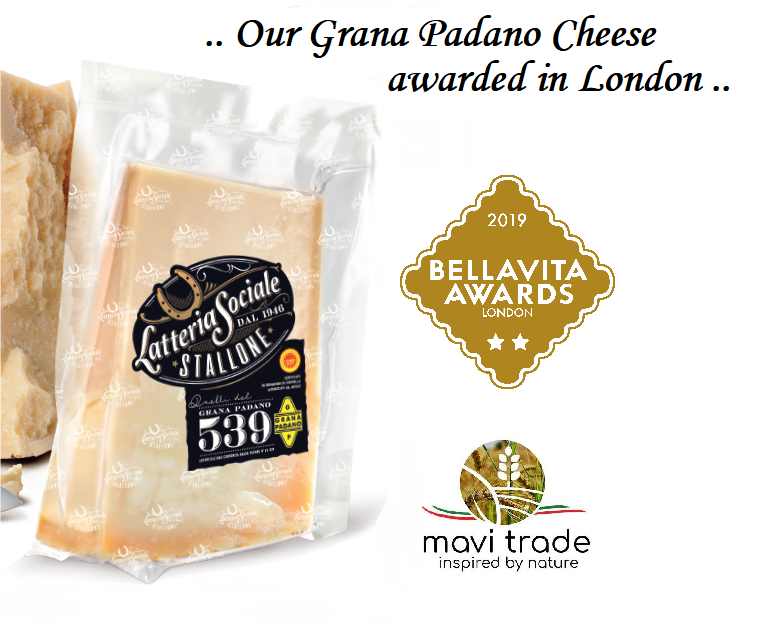 Grana Padano cheese is one of the best known and appreciated cheeses not only in Italy but also worldwide. The last November 2019 Ma-Vi Trade took part in Bellavita Expo in London, with  Grana Padano cheese 24 months aged, which won the awards “2 stars Bellavita”! 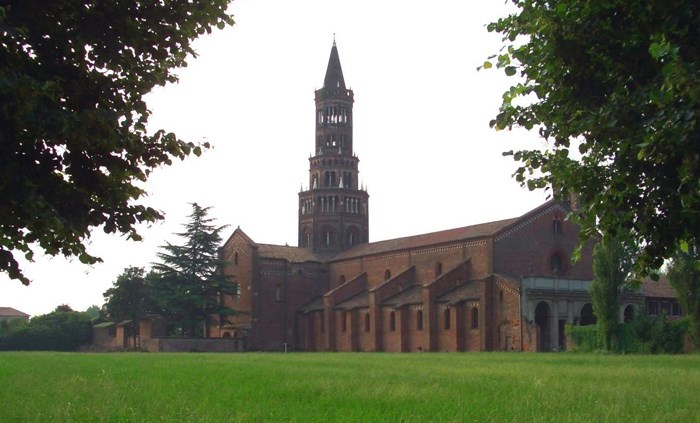 The Grana Padano cheese appeared for the first time in the 12th century thanks to the monks of Chiaravalle Abbey. In this period the marshy area near the Po river was reclaimed and people started cultivating and breeding animals. Soon the production of food and milk increased and exceed the requests of people who lived there. It was then that the monks, after lots of attempts, found out the way to preserve milk: making a hard cheese, known today as Grana Padano. At the end of the 11th century, the marketing of “old cheese” (because it was seasoned) was already an established reality with a real commercial network and branches in the most important cities. In the first decades of the twelfth century, during the reign of Frederick II, the “grana cheese” had assumed such a value and value that the wholes were used to make prestigious gifts, as well as as exchange and payment goods.

Curiosities about its name

“Peasants at the time called it “formai de grana” or simply “grana”, because of its typical grainy texture (“grana” meaning “grain” in Italian). Every area produced its own “grana”, so the name varied according to its geographical origin. Among the most commonly mentioned, the “grana milanese”, from Milan, the “piacentino” (Piacenza), the “mantovano” (Mantua) and the “lodesano” (Lodi) regarded by many as the oldest.”

The Grana Padano became popular in Italy. During years the process of production remained the same. For this reason, centuries after, in 1954 the Grana Padano Consortium was founded. All produces and retailers were part of it. The consortium assumed the role of controlling the production and trade of Grana Padano cheese.

In 1996 the European Union assigned a PDO (Protected Designation of Origin) certification to Grana Padano cheese. Quality guarantee because the PDO products represent the excellence of Italian agri-food production. Italy is, in fact, the European country with the highest number of agri-food products with Protected Designation of Origin and Protected Geographical Indication recognized by the European Union: 295 PDO, PGI, TSG products (traditional specialty guaranteed) and 523 DOCG, DOC and IGT wines.

How is Grana Padano made and where is it produced?

Nowadays, too, the Grana Padano cheese must be produced only in specific areas in the North of Italy. In fact, just the producers located in some provinces of the following regions are allowed to produce this cheese: Lombardy, Piedmont, Veneto, Trentino and Emilia Romagna (where there are, for example, Piacenza, Bologna, Ravenna and so on).

(source for the photo: https://www.granapadano.it/en-ww/where-grana-padano-comes-from.aspx)

If you want to know more about Grana Padano, check our previous article: “Grana Padano or Parmigiano Reggiano – what to choose?”

Grana Padano the most exported P.D.O. product in the world

The Made in Italy food and wine is always highly appreciated and bought abroad and, in particular, cheeses and salami are most in demand in the world, in fact they develop a turnover of almost 80%. Grana Padano occupies the first place ever.

In fact, even for the year 2019, Grana Padano is the best-selling and exported DOP product worldwide. With around 5 million shapes sold in the past year, it tops this special ranking.

Near Piacenza there is the Latteria Sociale Stallone Soc. Coop A.R.L., which is one of the most important producers of Grana Padano of the province. It was founded in 1946, after the end of the Second World War, by 26 owners of farms in that area.

In the 70s the agriculture changed due to the reduction of people working in the countryside, who migrated to the cities; rural areas were abandoned or passed into the hands of big landowners. Despite the general situation, the Latteria Sociale Stallone was able to overcome this difficult period.

In 1991 a fire destroyed the warehouse with the wheels of Grana.

After the accident all the partners and producers put their efforts together to rebuild the structure in shot time. 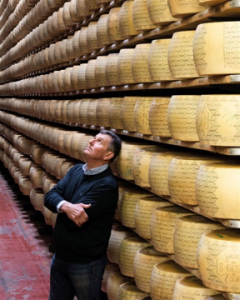 Today the Latteria Sociale Stallone counts 13 members and produces about 30.000 wheels of Grana Padano a year.

During the last few years they made some improvements, for example they introduced an automatic machine that helps turning the cheese wheels or they made a larger seasoning room. The last 7 and 8 November 2019 Ma-Vi Trade participated in Bellavita Awards in London. Bellavita Expo is the main international competition dedicated to Mediterranean food and beverage products.

Several judges evaluated all the products on the basis of six different criteria: taste, packaging and branding, story, innovation, sustainability, UK market relevance. The products which at the end had an average of more than 7 received one star, more than 8 two stars and more than 9 three stars (the maximum).

Exporting high quality Italian food products is our main objective, for this reason we are extremely proud of having obtained such an important international award.