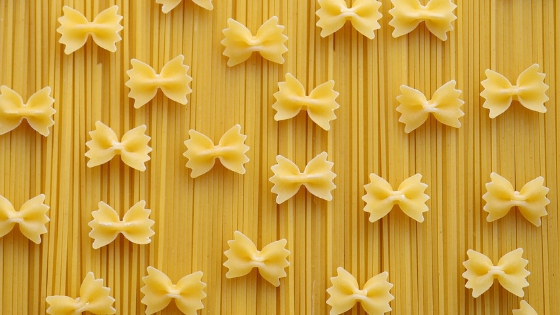 Posted at 10:13h in ITALIAN PASTA by Ma-Vi Trade

Pasta is the most popular main course in the world, symbol of the Italian culture and national pride. This is why for Italians is so important that pasta is properly prepared. It is more than a food, it is an element of union shared throughout Italy: it is an integral part of life, of popular culture (simple but traditional) of all Italians, not only of their cuisine, but of their very essence. Pasta means tradition, the symbol of Italian cuisine always and forever.

The origins of pasta

The origins of pasta are very old. It all began when the man abandoned the nomadic life, he learned to sow and gather and became a farmer. It is at that time that the history of man marries and intersects with that of wheat and with wheat begins the history of pasta. From harvest to harvest, from generation to generation, man has learned to work wheat better and better by milling it, mixing it with water, smoothing it into thin doughs and cooking it on a hot stone.

The first indication of the existence of something similar to pasta dates back to the first millennium BC, and is to be attributed to the Greek civilization.

The Greek word laganon was used to indicate a large, flat sheet of striped pasta. From laganon comes from Latin laganum, which Cicero cites in his writings. Laganas and pasta sheets conquered the empire and, as often happens, every people adapted the news to their experiences.

The first two certain dates in the history of pasta in Italy are: 1154, when in a sort of ante litteram tourist guide the Arab geographer Al-Idrin mentions “a food of flour in the form of threads”, called triyah (from the Arab itrija, which survives in the modern language and derives from the root tari = wet, fresh), which was made in Palermo and exported in barrels throughout the peninsula; and 1279, when the Genoese notary Ugolino Scarpa draws up the inventory of the objects left by a deceased sailor, among whom there is also a “bariscela plena de macaronis”. We know that Marco Polo returned from China in 1295: the legend is so dispelled that it was he who introduced the pasta (the one known in China, however, had little to do with that of durum wheat typical of our country) in Italy.

The Arabs of the desert were the first to dry the pasta for long-term preservation, since in their peregrinations they did not have enough water to make fresh pasta every day. Thus pasta cylinders were pierced in the middle to allow rapid drying. When? The oldest document consists of the cookbook of ‘Ibn’ al Mibrad (IX century), where it appears a very common dish among the Bedouin and Berber tribes, still known today in Syria and Lebanon: it is the rista, that is dried macaroni seasoned in various ways, but above all with lentils.

The drying allowed the pasta to tackle long sea routes, for which the Genoese traders were mainly specialized. They were usually and locally called fidellari, as fidelli was the name given to the spaghetti in this area of ​​the Italian North-West. Whereas in the rest of Italy continued to be called vermicelli, the same ones that later will take the name of spaghetti. So Liguria became a place of production of huge quantities of dried pasta, while Emilia-Romagna, Lombardia, Basilicata and Veneto will remain tied to the use of fresh pasta that still persists.

It was in the Middle Ages that the first Italian shops were built for the professional preparation of pasta, which from southern Italy, impregnated with Arab culture, moved towards the rest of the peninsula, North Africa, the Middle East, the Spanish East Coast and the rest of Europe. Already in the mid-thirteenth century large pasta factories were installed especially in Naples, Genoa and Salerno, cities that will then have a large participation in the evolution and success of pasta. Later they also opened in Puglia and Tuscany and in the fourteenth century were established the first Corporations Of Italian Pasta, controlled and regulated by the Pope, whose Vatican letters regulate the shopkeepers, and established between 1300 and 1400 that, especially in the city of Rome, there could not be less than 50 meters between a pasta shop and the other, to avoid quarrels between traders; documents that clearly showed how the art of pasta was enormously spread throughout Italy at that time.

What does pasta contain?

How much pasta does Italy produce?

Every year in Italy about 3.3 million tons of pasta are produced. Except for the small artisanal pasta factories, there are more than 139 pasta factories in Italy: 58 in northern Italy, 30 in central Italy, more than 50 in southern Italy. The regions where there is a greater production of pasta at national level are:

Today, more and more people suffer from food intolerances. For this reason, special pastas such as gluten-free pasta are very popular and spread all over the world. These kinds of pasta are designed for both celiacs and those who want to change their diet with products other than the classic durum wheat semolina pasta. It is indeed important to introduce alternative cereals to the grain in order to make the diet richer and less monotonous. The alternatives to wheat pasta are now very numerous: rice pasta, corn, buckwheat, peas, millet, quinoa, amaranth, sorghum, oats. Zero additives: only flour, water and lots of flavor.

Nowadays there are many varieties of pasta that can be found today on the market, which differ in shapes, colors, flavors as well as for type of production. Depending on the shape, they can be grouped in the following categories:

Depending on the type of surface, pasta can be divided in two more categories:

Moreover, by adding particular ingredients to the mixes it is possible to give the various formats also different colors:

The taste of pasta is given by an able combination of flour and aromas. In addition to soft wheat flour and durum wheat semolina which are the most used, many others can be used such as spelled, rice, barley, chestnuts, buckwheat etc. In the choice of flour, it is essential to keep in mind their gluten content because it influences the resistance of the dough and the resistance to cooking that increase proportionally to it. In fact, during cooking, the two gliadin and glutenin proteins contained in the flour are bound to water, forming a kind of net. The proteins of the semolina form a tightly knit network imprisoning the starch that would make the pasta sticky; those of soft wheat flour form a wide-meshed net that hardly retains the starch of the dough which will tend to overcook.

The term aromas includes all the ingredients that can be mixed into the dough making it more flavorful. First for importance, egg: in addition to enriching the flavor, it has the ability to bind to the particles of flour and other ingredients, making the dough sticky, easier to form and of greater consistency after cooking; immediately after, the extra virgin olive oil which gives the mixture elasticity and plasticity; third is the salt, that helps to strengthen the glutinous mesh, while stiffening the dough a bit. Beyond these there is a long series of foods as varied as the imagination: breadcrumbs, cheese, various dried or fresh herbs, spices, chilli, …

Pasta is a common food all over the world. Outside Italy, however, our culinary rituals are twisted, and here we find ourselves in front of a pasta topped with ketchup and maybe placed next to a steak as a side dish. Here are some simple tips to help foreigners who want to avoid mistakes in the preparation of pasta.

In Italy pasta is mainly served in four ways:

Condiments are dresses in color and flavor specifically cut to size for the type of pasta you want to season. They include very different preparations, both for the components and for the cooking techniques: sauces and meat sauce, béchamel, cheese fondues and reductions of cream, raw vegetables, meat or vegetable broths, etc. Undisputed protagonist of all the condiments is tomato that, becoming part of numerous preparations, has contributed to the success of the most famous dish of our cuisine and is now considered the “classic” accompaniment. Whatever the seasoning, it has to be in the end rightly creamy, not watery or too dry.

How many calories in a portion of pasta?

The difference is given by the quantity that is consumed and obviously by the type of seasoning that is added. You could eat pasta every day, for lunch and dinner: but only if you keep in the indicated order of 70-80 grams, and it is seasoned with vegetables and a spoon of extra virgin olive oil, you will not gain weight. The advice is to eat pasta at lunch, combining vegetables and protein sources such as legumes or fish.

The Italian rules for pasta consumption:

Finally we review the most frequent errors that are made abroad in the preparation of pasta, providing some simple guidelines to avoid them.

You say pasta and think of Italy. If you want real italian pasta, contact our company. We will be happy to deliver the pasta you want.