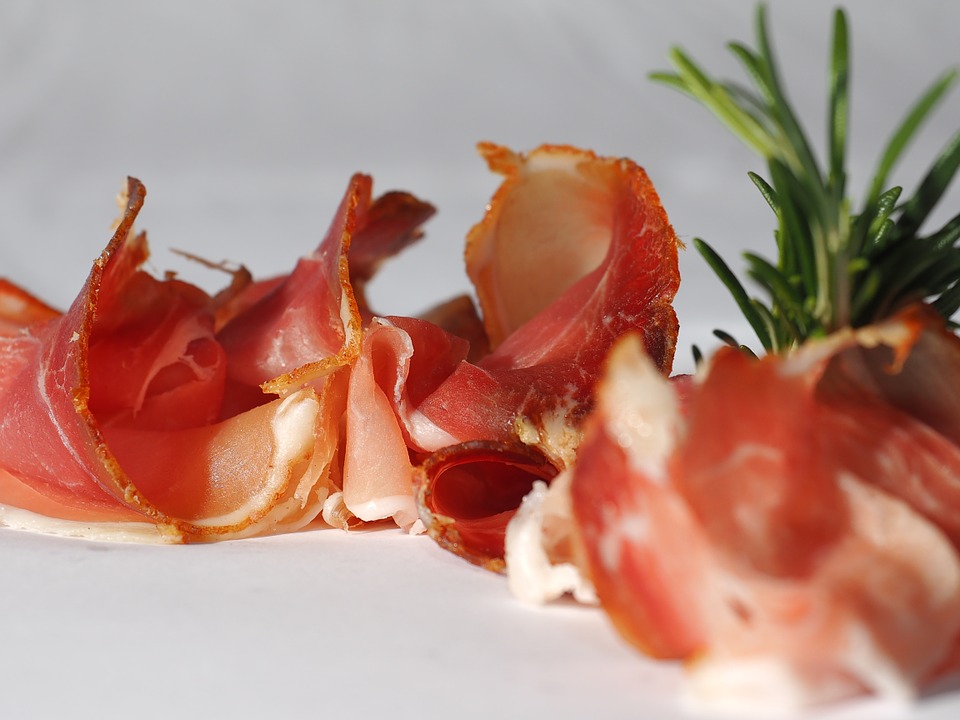 Posted at 14:10h in ITALIAN CURED MEAT by Ma-Vi Trade

Parma Ham is an all-natural Italian PDO product, protected by a consortium. Its texture and its flavour make Parma Ham an Italian food excellence, well known and appreciated both in Italy and worldwide. Here below there is a presentation of Parma Ham, of the stages of production together with many tips on how to use it in different recipes.

It consists in the union of producers who use and respect all the traditional processes for the production of Parma Ham. The consortium has the main objective to guarantee the quality of the raw material and the respect of all the production stages. Other than this it is responsible for the protection and promotion of Parma Ham both in Italy and all over the world. For example, the consortium ensures the “protection of the denomination “Parma Ham” and of the relative brand (Ducal Crown) world-wide”.

Are Parma Ham and prosciutto the same?

Nowadays the consortium counts 150 associates, all located in the typical area of production. The abbreviation P.D.O. stands for “Protected Designation of Origin” and it indicates the fact that a real Parma Ham must be produced only in a certain area, with specific stages and raw materials. The geographical, human and natural factors (such as local traditions, climate, which is ideal for drying…) affect the product’s quality and all its typical characteristics. This is why Parma Ham is different from any other ham and it is well appreciated for its sweetness and flavour.

“An essential condition for obtaining the “Prosciutto di Parma” designation is that the entire process takes place in an extremely limited area that includes the area of the province of Parma lying to the south of the via Emilia at a distance of at least 5 km from it, up to an altitude of 900 m, bounded to the east by the Enza river and to the west by the Stirone torrent.”

How Parma Ham is made? 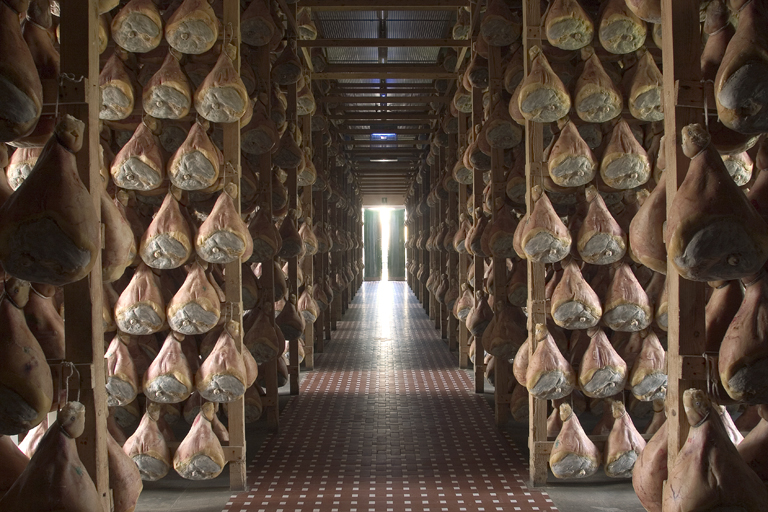 As we can read also on the Parma Ham Consortium website, there are 10 main stages of production:

Specific controls are made when selecting the pig, which then will become Parma Ham, regarding the area of origin, the breed, the age (over 9 months), the weight (about 160 kg). Once these characteristics are certified the pig, without having eaten for 15 hours, can go to slaughter.

The leg is separated from the rest of the body and it is left in cooling rooms for a day until it reaches the temperature of 0°. During this time the product loses about 1% of its weight. It is important to say that this is the only preservation treatment for Parma Ham, without the addition of preservatives or colorants.

Some fat and part of the skin is removed in order to give the ham its typical shape and to facilitate the following phase.

During this phase humid salt is used to cover the pig skin, while the other parts are covered with dry salt. It is important that the leg has a uniform temperature to let the salt be absorbed perfectly. The legs rest in a cold store (temperature: 1°C to 4°C; humidity: 80%) for six/seven months. After that the residual salt is removed and the legs are covered again with a small layer of salt. They are put in another cold store for 15/18 months where the legs slow absorb the salt and lose humidity.

After the residual salt has been removed, the legs spend from 60 to 80 days in aired stores with controlled temperature and humidity level.

The legs are washed with warm water. For one week the drying process of the legs occurs in natural conditions (if the weather is cold, wet, or too humid special dryers are used).

For 3 months the legs are hung on wood frames in a room with many windows which are opened or closed basing on the levels of internal and external humidity.

Some parts are covered with a mixture of lard, salt and pepper in order to loss humidity and not to dry too rapidly.

During this phase the ham is transferred in rooms where it will assume the typical Parma Ham characteristics of taste and flavour. The aging period is minimum 12 months.

After the aging period “a horse bone needle, which rapidly absorbs the product fragrances, is inserted in different parts of the ham and smelt by experts who can verify the development of the production process. Only then are the hams ready for the official stamp of certification: the firebranding with the Ducal Crown. Since the fire branding is the final guarantee that all the processing stages have been carried out correctly, the officers of the independent certifying body, the Istituto Parma Qualità (I.P.Q.) arrive.  The officers check the ageing period from the registers and the seal on the ham and they ensure that the hams have conformed to all the processing procedures.”

Here below there are the videos showing where and how the Parma Ham is produced.

How to recognise the original Parma Ham

The Parma Ham is easily recognisable by the presence of a brand representing the Ducal Crown together with other indicators. 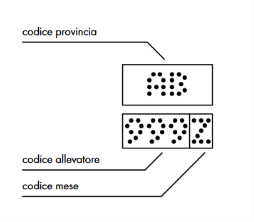 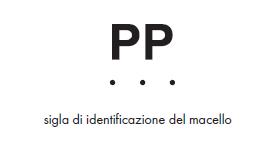 Then, it is the turn of the metal seal with the initials C.P.P. (Consorzio Prosciutto di Parma) and the date of the beginning of curing. 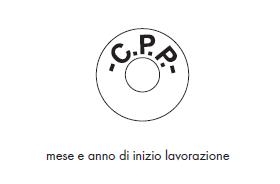 Finally, the Ducal Crown with the identification code of the producer is put on the Parma Ham. This symbol has two main functions: identification and authenticity. 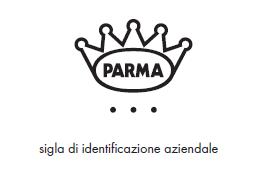 How to eat Parma Ham? 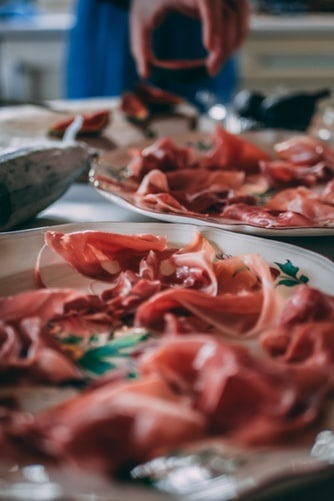 Parma Ham could be a very versatile ingredient, ideal for different preparations. As this product is the result of a long tradition and it is a symbol of Italian food history, we would like to share with our readers some important rules on how to eat Parma Ham properly:

This type of cured meat can be combined with both white and red wines, such Malvasia or Lambrusco, which are Italian wines produced in areas between Parma and Piacenza.

As an entrée, in Italy we use to serve some slices of Parma Ham (together with other cured meats such as salami or pancetta and so on), some Italian cheeses (like Grana Padano, Gorgonzola and others), vegetables in oil and bread.

A typical plate eaten during summer in Italy consists in Parma Ham with melon, as these two different flavours perfectly combine…

Don’t be sceptical about this unusual match, try it! 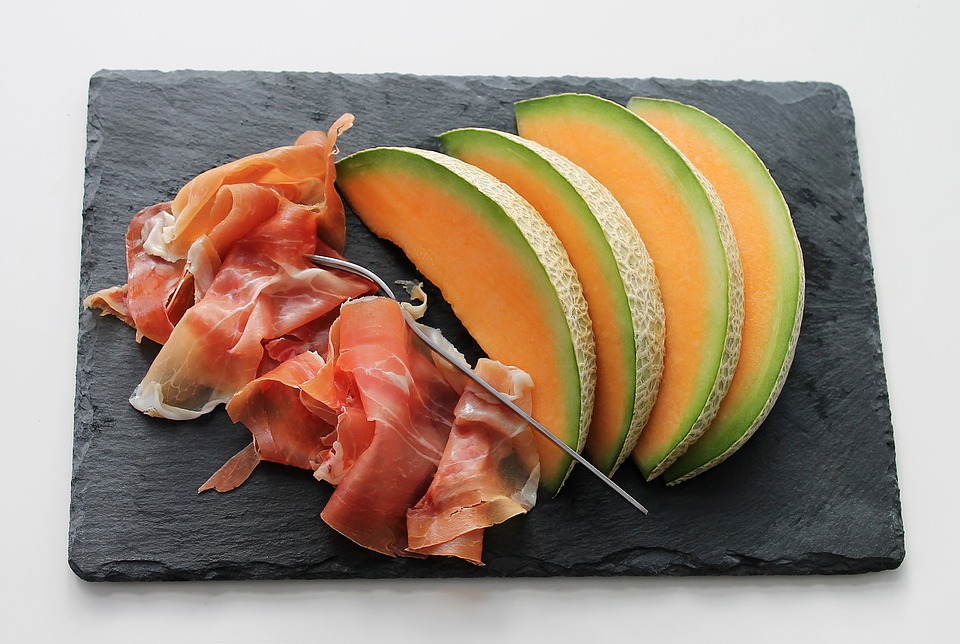 Sometimes the slices of Parma Ham are wrapped around fish or chicken and cooked in oven. The two recipes below you may enjoy are taken from the Prosciutto di Parma website: 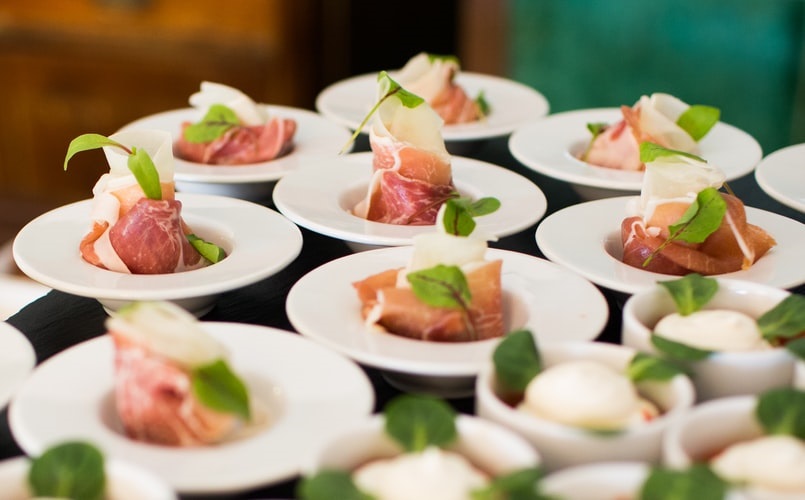 Quick recipe: Parma Ham slices can be used to make an Italian-style panino with a little of olive oil, mozzarella and tomatoes. 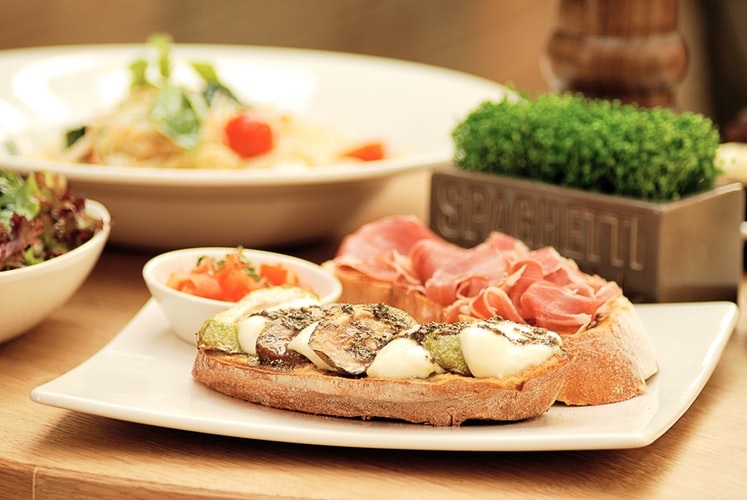 These are just few examples of the endless possibilities you have to enjoy Parma Ham. Let the special flavour of this ham inspire you to make other plates!

Do not hesitate and contact us for any further information you may need.